You may be wondering what my excuse is this time. I have a semi-good one, I promise. The past few months I’ve been plowing through the gargantuan housekeeping project of purging my possessions and reorganizing my apartment. The clutter was getting too hard to live in.

Here’s what my place looked like a couple of years ago. Prepare to be horrified. It still looked about the same when I started cleaning up–the mess had just moved around. 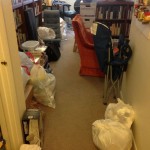 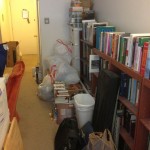 My goal was to open up floor space by getting rid of things, using more vertical space, and giving everything a home. I’d say it worked pretty well! 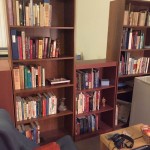 The biggest task was dealing with my books. Weeding my book collection involved a lot of nuanced, intuitive decisions that balanced various factors. To help myself make the tougher decisions, I paid attention to the questions I found myself asking and made a sort of flowchart, which I’ve posted here. Maybe you can adapt it for your own purging projects. In the end I took about twenty storage boxes to Half Price Books.

I planned my new furniture arrangement by cutting out bits of graph paper to represent the furniture and placing them on a graph paper map of my apartment. The next time I rearrange, I’ll use home design software, like Sweet Home 3D.

But that probably won’t be until I the next time I move. Nearer term phases of this housekeeping project will involve replacing the storage boxes in my closet with nicer containers, scanning and purging my papers, and decorating.

Looking back at this whole process shows me something I hadn’t really believed, that a simple decision (and a lot of work) can make a substantial difference in one’s way of life. Normally I think of people’s life patterns as consequences of their fairly stubborn strengths and weaknesses, so changing an external factor, such as moving to a new city, won’t typically solve their problems, unless they’re moving out of an abusive environment. But this project has turned my apartment from a frustrating, depressing place to live into one that can inspire me with few obstacles. It’s been several weeks since the majority of the project has been completed, and my apartment has stayed in its new orderly state, so I have hope that it will continue.

Ordering my apartment has also helped me order my project work. My books were the catalyst. People own books for different reasons. Mine are mainly tools for my projects. While I was sorting through my hundreds of books to decide which ones to keep, I was faced with a fundamental truth about my projects: I have unlimited project ideas and only limited time. Often when I come up with an idea, I imagine myself blissfully working on it with loads of uninterrupted time sometime in the unspecified but relatively near future. Well, I don’t have overlapping futures in which to actually do that for every idea. While I’m better at working through my projects than I was, if I want any chance of completing all the ones I care most about, I’ll need to tighten things up more.

So I cycled through another iteration of my overall project strategy. To make sure I knew which projects I really care about, I started a list of my top 40 projects. I assumed each one would take a year, and I made a conservative estimate of my lifespan. So far I’ve filled in almost 30, and I’ve covered most of my main topics, so the prioritizing is going well so far.

I also came up with a better project workflow. Organizing my apartment helped me identify the typical contexts in which I work on my projects, and that led me to think about them in terms of an assembly line. For example, I usually do some work in my car during lunch, and there it’s easy to read or write when I only have to consult my head. Taking notes on books is harder. So when I get to a notetaking phase, I move the project to my computer at home. To get through the projects faster, I’m trying to limit myself to one at a time per context.

My transformative housekeeping project has made this winter a good one, despite the bone-chilling cold. But the next time I get wrapped up in a long project, I don’t want to neglect the website like I did this time. I’d like to post at least once a week. Fortunately, my current writing practices are making this more likely. So I’ll see you in a few days on a completely different topic!

This entry was posted in Books, Housekeeping, Life updates, Projects. Bookmark the permalink.

This site uses Akismet to reduce spam. Learn how your comment data is processed.