Difference between revisions of "Math Relearning/EngageNY/GK"

From The Thinkulum
< Math Relearning
Jump to navigation Jump to search

These are my comments on EngageNY's Kindergarten modules.

Kindergarten is largely the same as pre-K, just moving a bit faster. This is because New York's pre-K standards are practically the same as the K standards. This actually makes it harder for me to work with in a short time frame because I don't want to replicate my efforts with pre-K, but I don't want to take too much time to sort out what's unique about Kindergarten. These comments will mostly document my false starts and other ideas I had but postponed.

At this point I'd like to note that the lesson objectives of this curriculum basically form a second set of standards. I might be even more interested in these than in the Common Core standards because, since they're meant for actual teaching, they're more granular, and they're specifically ordered to unfold the concepts logically.

But the lesson objectives aren't enough by themselves to give me the sense that I'm grasping everything. I want something I can read that will make me feel like every statement flows logically into the next. For that I need concepts and not just lists of tasks.

When I think about formalizing math concepts, these concept types seem important: objects, properties (of objects), relationships (among objects; relationships include things like equations), tasks (specific results to achieve using relationships), algorithms (procedures for carrying out tasks), capabilities (types of situations that particular relationships and tasks can address), applications (specific real-world situations to be solved with math). These form components of a system for doing math.

I think I'm enough of a visual learner that diagrams really would help me grasp this stuff. Right now the curriculum material feels like a wall of text. I'm thinking of extracting the relevant graphics from the lesson files and putting them in a new document listing the concepts.

I also think it would help me remember the concepts and piece them together if I had a name for each one. That would take a lot of work on top of all the work of discerning and spelling out the concepts, but it might be worthwhile.

Taking notes that simply copy from the source material feels like a waste of time, but it's helpful to have a streamlined set of information to examine and review, so maybe it is worth the time.

I'll dispense with the new propositional concepts for the rest of Kindergarten for now. It takes a little too much time to separate the new ones from the ones covered in pre-K. I might come back to it later.

One characteristic of this curriculum that makes the pre-K/K comparison harder is the ways the lesson objectives are worded and the tasks and concepts woven together as the lessons progress. To be honest it looks more like a tangle to me. I thought a more worthwhile use of my limited time on the material would be to tease the threads apart somewhat and separate them into more distinct strands, but that also ended up being too much work.

Each lesson objective has this general structure, possibly with some elements left out: Perform action A on object B within parameters C for purpose D. Several actions can be chained or simply collected within one lesson.

If I had lots more time, I might come up with a normalized version of these objectives that followed a small set of grammatical patterns and used a more controlled vocabulary. It would make the objectives and their progression a little easier to think about, but really it's overkill for what I need.

I did make a list of verbs, nouns, and modifiers the objectives used to see what basic tasks and objects the grade covered, and then I started writing a simplified set of tasks for it, but then I realized I was basically reproducing the Common Core standards, so I scrapped that idea. Instead I'll just review the standards.

I'll also review the sections of the Progressions that cover Kindergarten, and I'll do that for each later grade as I get to it. They seem to discuss most of the conceptual material I want to explore.

I'm comfortable with most of the Kindergarten tasks, of course, but there are a few I'd like to spend some time on.

I'd like to get better at counting objects quickly in my head. I've experimented with a couple of approaches.

Drawings of dot configurations for subitizing

The first was to begin drawing configurations of dots on graph paper. The idea was to learn to recognize the configurations when I saw them within scattered configurations so the objects would be easier to group. Then counting becomes a matter of adding the quantities in the groups. In my drawings I started with 1 dot and increased by one each set, following a couple of rules for each configuration:

I've uploaded the (haphazard, possibly inconsistent) results, which you can download using the thumbnail on this page. I got through pretty much all the 4-dot configurations and a little way into 5 dots. I thought about writing a program to generate the configurations, but I didn't want to spend that much time on them.

It became obvious that there were far too many configurations to memorize, but it was interesting to observe patterns among them. For example, I found I could create configurations in an orderly manner by starting with a line of dots and then moving each end one space at a time. You can see that in the 5-dot set.

I also noticed that part of seeing a configuration was mentally associating its parts in particular relationships or seeing the dots as having specific roles, which I think amounts to the same thing. This means I can think of certain 4-dot configurations in relation to similar 5-dot configurations, which might help me with my persistent confusion between 4- and 5-object groups. So if there are 3 dots in a line and 1 below the middle dot (configuration 24 on my page of drawings), I could certainly think of that as 3 + 1 or as a squished box (configuration 27), which directly give me a count of 4; but if one of those conceptualizations doesn't occur to me, I can notice that there aren't 2 dots in the bottom row, which I'm used to associating with 5 (configuration 43). Or I can think of it as the X pattern of 5 on a die (configuration 33) with one of the corner dots missing. 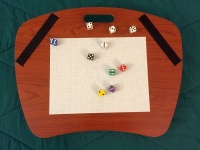 Since there were too many configurations to memorize, not even counting the ones that didn't fit nicely on a small grid, I decided to create scattered configurations by dropping actual objects and to observe patterns in counting that emerged as I practiced. I decided on dice, since I have enough of them for groups of at least 10. I placed a letter-size sheet of paper on my surface and determined which dice to count by including only the ones that landed fully on the paper (see the example image).

What I noticed about counting these truly scattered configurations is that groups of 3 were good to look for. Sometimes I'd notice 4, 5, or 2, but 3 gives me a good basis for noticing larger groups, up to at least 6 (easy because it's two groups of 3).

My mind gets a little stuck on certain arithmetic facts, and it takes me a second to remember them, which is irritating when I'm doing mental math. I think I just need practice. So based on the addition and subtraction situations in Counting & Cardinality and Operations & Algebraic Thinking: Grades K-5 (PDF), I made a tab-separated file to import into the flashcard app I use on my phone, Flashcards Deluxe. You can download the file here.

The general range of numbers I'm decomposing in these equations is 1-20, since that's the focus in Kindergarten and it's the basis for all other addition--you're either working within 10 or across at least one 10 grouping. But I limited my actual range of totals to 6-19 because I don't think I have trouble decomposing 1-5 or 20.

I've only barely started studying them, but one thing I've noticed is that for some reason I have trouble when the unknown is 11.

I didn't see much in Kindergarten geometry I needed to practice, but I thought it'd be interesting to explore shape compositions, so I bought a used Tangoes set to solve tangram puzzles. EngageNY suggests using tangrams to challenge above-grade-level students (Module 6, Lesson 7), so I feel pretty special.